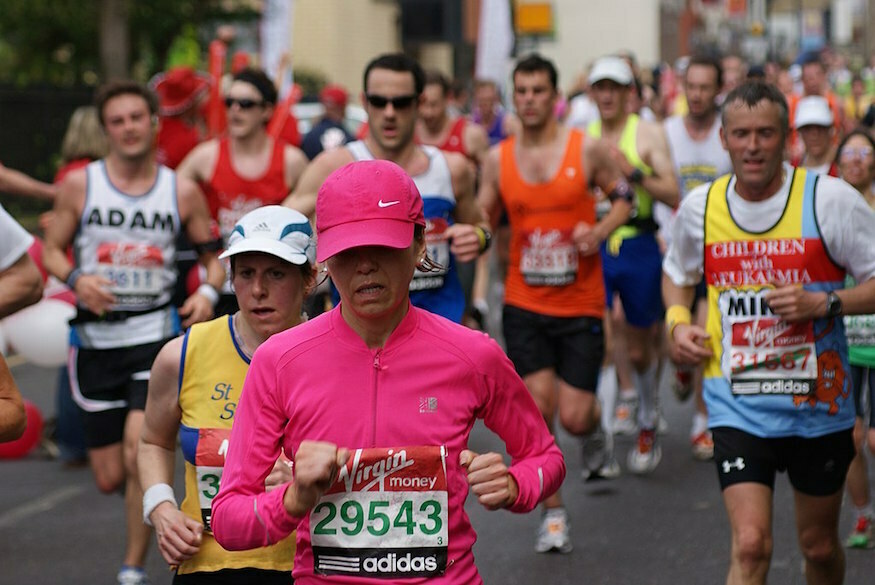 Sunday 2 October is the date of this year’s London Marathon. It’s normally in April, but the Covid pandemic is still having a knock-on effect on large-scale events.

The 2020 London Marathon was an elite-only, closed-loop circuit event at St James’s Park in October of that year. The 2021 London Marathon was also held in October, with 40,000 runners taking part in person, and a further 40,000 taking place virtually. When planning for the 2022 event began (these things take time, you know…), it wasn’t clear which restrictions might still be in place for April, so October was chosen once again.

What time does the London Marathon start?

2022 timings are yet to be confirmed, but the mass participation race normally sets off from 9.30am, with Elite and Wheelchair races setting off at staggered times from 8.30am. 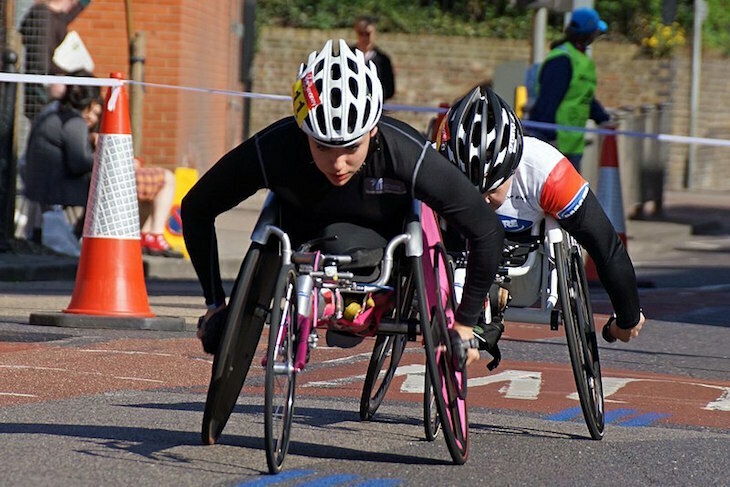 Greenwich and Blackheath is the starting point, with runners assigned one of three start lines. They all merge by the three-mile marker, following a route from Woolwich back towards Greenwich town center (hello, Cutty Sark), through Rotherhithe and Bermondsey, and across Tower Bridge, at which point you’re almost halfway there.

From here it’s back east towards Limehouse, a big circuit around Canary Wharf and the Isle of Dogs, before doubling back through Shadwell to Tower Gateway. From here, the route stays close to the Thames all the way down to Westminster Bridge, where it turns onto Great George Street, continues onto Birdcage Walk, and sweeps round in front of Buckingham Palace for the iconic finish line on The Mall.

You can see a mile-by-mile video of the route on the London Marathon website.

Landmarks to look out for on the London Marathon route

Running the route and need something to keep you going? Or watching on TV and need to orientate yourself? The London Marathon route passes several iconic landmarks, including:

Where’s the best place to watch the London Marathon? 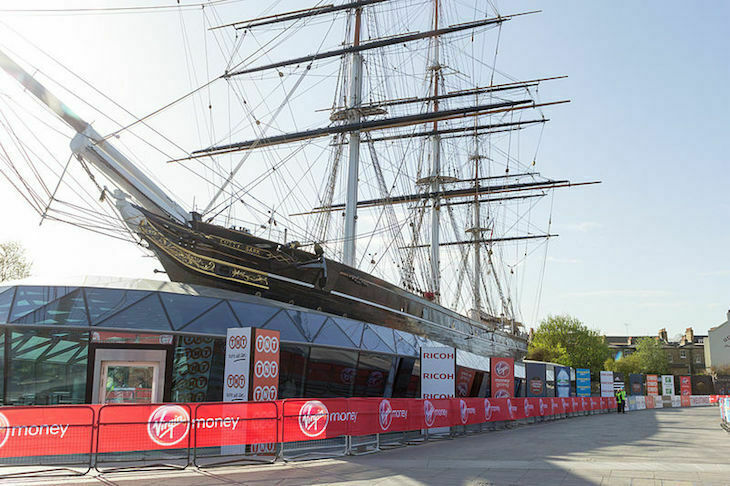 It won’t be this quiet on Marathon day…. Photo: Katie Chan via creative commons

Depends what you’re after. Some points along the route — Greenwich around the Cutty Sark, Tower Bridge, and of course, near the finish line around St James’s and Westminster, get VERY busy, with people cheering on friends and strangers. If you want to soak up the atmosphere and are willing to put up with crowds, and standing for several hours, go for it.

Otherwise, head for somewhere where fewer crowds gather. From our experience, miles 9-12 around Rotherhithe and Bermondsey tend to be quieter, as d0 miles 14-21, east of Limehouse and around Canary Wharf.

There of course, there’s the third option…

How to watch the London Marathon on TV

The London Marathon will be shown live on the BBC as usual. Check the schedule closer to the time for details.

Road closures for the London Marathon

The marathon only takes place on one day, but it’s such a big event that some road closures (and parking restrictions) start on Thursday 29 September and continue until Monday 3 October.

Obviously, any road on the route will be closed on the day, which means some bus services will be on diversion — check the TfL website for details. It’s a rolling road closure situation, with the first parts of the course expected to start reopening by about 1pm, once the final runners have cleared the area, though the latter parts of the course aren’t expected to reopen until late Sunday evening.

Birdcage Walk, close to the finish line, will close on Friday, and not reopen until Monday morning.

Full information about road closures is available on the London Marathon website.

How many people are taking part in the London Marathon this year? 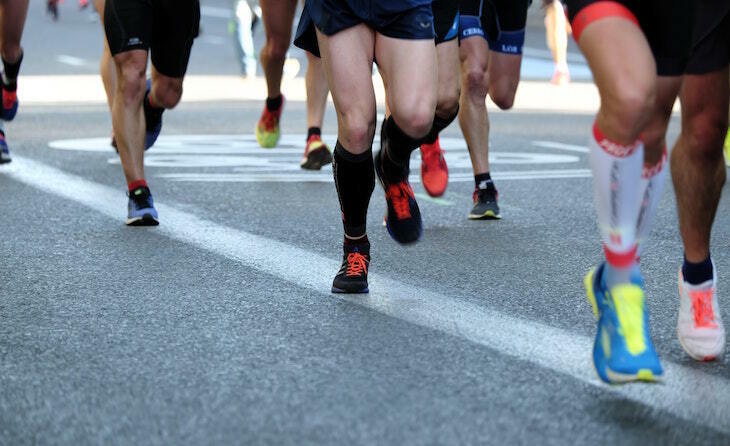 Photo: Miguel A Amutio via Unsplash

Any celebrities running the London Marathon this year?

Plenty. Actor Stephen Mangan in running in support of Marie Curie, and TOWIE’S Mark Wright is giving it another go after having to pull out due to injury last year. McFly drummer Harry Judd is running for The Children’s Trust, and singer and Strictly guest judge Cynthia Erivo is also taking part.

Champion rower James Cracknell, and radio presenter Chris Evans are also among those due to be lining up with the masses, though do keep your eyes peeled on the day, as other well-known faces might be flying running under the radar.

What else is new for this year?

The London Marathon has a new sponsor for 2022. Indian IT company Tata Consultancy Services added the London Marathon to the list of marathons around the world it sponsors (Toronto, Amsterdam, Mumbai, New York City, Berlin, Chicago, Boston… guess they really like running).

For the 11 years prior to this, Virgin Money was the sponsor, and before that, it was Flora.

Are there places left for the 2022 London Marathon?

You’ll struggle to find a place to run in person, though you might get lucky with a charity place. Otherwise, there’s still time to sign up for the virtual London Marathon, and run your own 26.2 mile route of your choosing on the same day as the London event.

Will the 2023 London Marathon be in April? 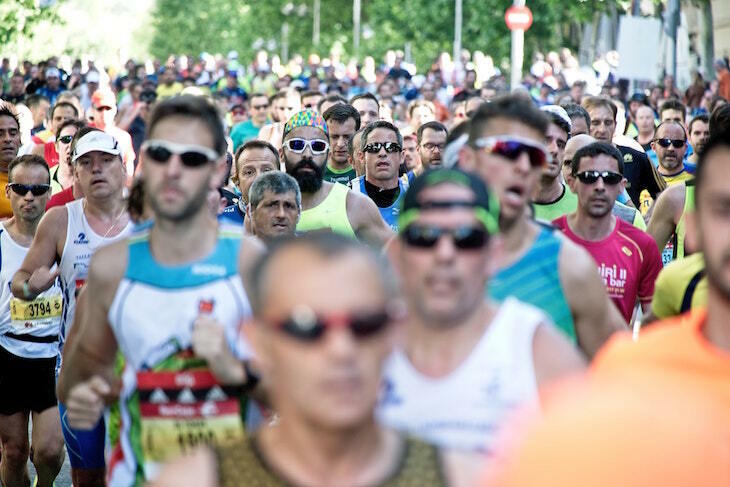 Photo: Miguel A Amutio via Unsplash

How to enter the next London Marathon

Inspired by the top-notch running in this year’s London Marathon, and fancy having a crack yourself? You’ll have to be quick — the ballot for places in the 2023 London Marathon opens on 1 October 2022 (before the 2022 Marathon even starts). Closing date hasn’t been announced at time of writing, but given the event is under seven months from that date, the ballot likely won’t be open too long.

If you’re not successful, certain charities have places available each year. These places are highly coveted, and you’ll likely need to commit to a minimum fundraising amount.

The NFL confirms three more games at London venues for 2023

Swim England and partners have launched the Para-Swimming London project

The time is now: 6 resolutions for London sport in 2023