A lot of money and the most fairy lights in the world have been spent making London’s Mayfair look pretty this time of year. Still, the place just can’t help but be ugly. Outside Novikov on Berkeley Street – owned by a man who once boasted about being Vladimir Putin’s favorite caterer – the crowds still clamor for £18 bowls of mediocre minestrone through the sparkling, light-crusted doors. Across Berkeley Square is Bacchanalia, Richard Caring’s latest attempt at making Vegas look classy. It appears to be modeled after an imitation Greco-Roman knockout, complete with a Damien Hirst sculpt of “winged lovers embracing atop a unicorn”. They just hung their opening menu outside: a dozen oysters for £64? Or how about 125g Beluga for £935? Sod it, you have both.

Meanwhile, the Belgium v ​​Canada World Cup game is being broadcast in the doorway of the newly refurbished Barley Mow pub north of Grosvenor Square. I’m not interested in football. I don’t understand how anyone would link their emotional well-being to the activities of 11 people they’ve never met (a minority opinion on World Cup final day, I’ll grant you). Still, I find televisions deeply soothing. We may be in Mayfair where it’s hard to find a non-filled lip or non-irrigated colon. But there are still traces of normalcy: Guinness and London Brewing Co’s Upright on tap and the matchstick to stare at while sipping them. 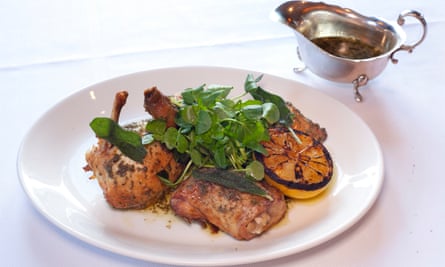 “Hot roasted so the skin is dark and slightly chewy”: half a chicken. Photo: Sophia Evans/The Observer

But look around you: at the bar’s beautiful etched glass windows and deep lacquered sheen. Now head up the narrow staircase to the dining room, where the tablecloths are thick and the Art Deco ceiling lights and sconces emit a honeyed amber glow. Here they have a glass fronted display case for their collection of Neal’s Yard cheeses. The Barley Mow was bought earlier this year by Cubitt House, a company which has been giving a slick, robust makeover to a cluster of central London pubs including the Alfred Tennyson in Knightsbridge and the Princess Royal in Notting Hill for some time. These are pubs for people with very clean boots.

Barley Mow is now run with a steady hand by Lara Rogers, who is as close to pub royalty as it gets these days. She learned her trade alongside her father, Oisin Rogers, the famous landlord, most recently of nearby Guinea Grill. But what really matters for our purposes is the food, which is overseen by Ben Tish, formerly of Game Bird. He’s come up with an offering that’s as butch and beguiling as the decor. Start with a bar menu of sausage rolls with their own brown sauce or a haggis and scotch egg. Better yet, try the hot meat bun, a wobbly construction of brioche buns toasted into a smoky char, stacked with slices of slow-cooked beef and pickles, with a jug of extra sauce on the side for a bit of French dip. Like all the best foods, it’s shirt-busting messy. In a city infested with over-tech burgers, it’s more than welcome novelty. 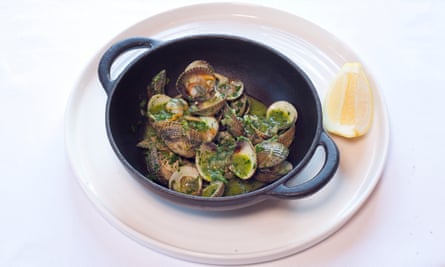 Or drop your elbows on the thick tablecloths upstairs and order the fresh cockles in the shell. Cockles are more than equal to Palourde mussels. These come in a hot, liquid bog of garlic-like parsley butter and provide tremendous opportunities for clam sucking. If that’s too much of a mess for you, have a platter of venison terrine en croûte in a glazed picture frame made of hot water batter, through which the jewel-green pistachios shimmer. It is served at just the right temperature so the jelly is just beginning to melt.

The main course is of course a beef pie with puree and parsley sauce (optionally fried oyster). Sole is available in different variations and a daily changing roast. It’s two today, although I can’t quite hear the roast beef because I say yes before our waiter gets to the “y” in the pork belly. It’s a slow-cooked, tender bake with big puffs of greaves and a herb-stuffed sirloin, sliced ​​and crispy. Add to that their bronzed dauphinoise au gratin. They warn me that it is prepared with anchovies, which I take as a recommendation. It is approaching Jansson’s temptation area. That’s never a bad thing. Alongside half a chicken, fried hot so the skin is dark and slightly chewy, comes a jar of sage and truffle butter. 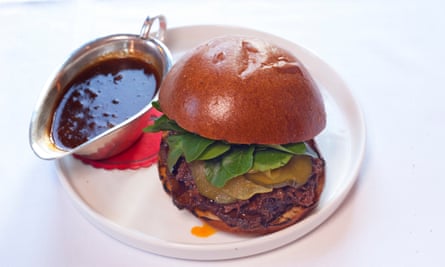 There are many places in London for a light dinner full of sophistication and grace. This isn’t one of them. You can order seasonal vegetables if you like. But over there under ‘sides’ it mentions fries with roasted garlic aioli and an aligot of Westcombe curd. Decisions have to be made. Who am I to judge, what with gravy dripping from my forearms and a beard covered in parsley butter? If this picture doesn’t help you, thank you for not being on the other side of the table.

How much does all this cost you ask? And you know. It’s still a bloody Mayfair, with money managers rolling up their sleeves, ordering big bottles of Bordeaux and bemoaning the state of China’s economy. Tolerate the other clientele as they do to me. See, it’s not as bad as the newly opened restaurant above nearby Audley, where the lobster cake for two is £96 and the rib eye is £48. This is my attempt to avoid the question. OK. It’s still pretty tight here: £13 for the hot meat bun, £15 for the cockles, £36 for the pork, sides included. But unlike the place a few weeks ago where I complained about £100 dinner for something that was fine, this is so much more. That’s the problem with really expensive stuff. Yes, many are stupid and annoying, but some are really nice. The barley mower is really beautiful. 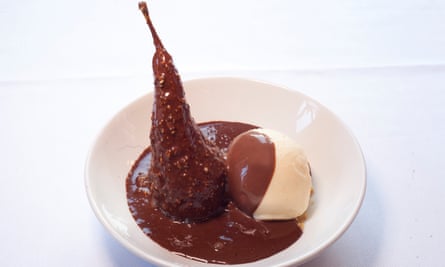 The dessert menu is legit, with a baked Alaska for two and crepes suzette, and a sticky toffee pudding with clotted cream being the only weak moment. The sponge should be saturated with sauce. Here it is only poured on at the end. Take the poire belle Hélène instead. It’s a perfectly poached pear with a cookie crumb crust, vanilla ice cream, and a chocolate sauce that, like me, has obvious depths. Then you stumble down the stairs, past the now-dark TV screens, and out into the fairy night, with a full stomach and an empty wallet.

Chef Mark Hix is ​​in a planning battle with Dorset City Council over a terrace structure he built for his £20,000 oyster and fish house in Lyme Regis during the pandemic. The outdoor terrace is located in Lister Gardens, next to the restaurant, on a site leased from the community. He recently applied for a lease extension but was told the application would be denied. In a letter to the council, he has argued that post-Covid trading conditions are still difficult and that “removing the deck would undoubtedly have a serious impact on our business and jeopardize the future of the restaurant”. Hix starts a petition (theoysterandfishhouse.co.uk).

Sad news from Edinburgh. Paul Kitching, the brilliant chef and owner of restaurant and boutique hotel 21212, has died suddenly at the age of 61. Before moving to the Scottish capital in 2010, he held a Michelin star for over a decade at Juniper in Altrincham, for many years the only restaurant in Greater Manchester to be so recognized. His food could be both crazy and inspired. A hilarious meal at Juniper might include a salmon-pink “spaghetti mash” that spells the word spaghetti, which is scooped off the plate or mopped up with bread, or tiny fried eggs, the whites of spicy plain yogurt, the yolks of mango puree. It all sounds crazy and it often was, but it was always delicious. Kitching was something rare: a really creative chef who knew how to use his own creativity. He will be greatly missed.

Tipjar, the non-cash tipping platform, has calculated that average restaurant earnings fell by 17% on rail strike days in October and November. Staff could lose around £15million in tips this month given the number of strike days in December. Tipjar’s Ben Thomas believes this could result in a loss of around £40 for staff. “While we come to terms with the workers who speak out for improvements in wages and working conditions,” he said. “Our job is to represent some of the lowest paid workers whose income is directly linked to the footfall in their pubs and restaurants.”