Skiing, Snowboarding, Bobsleigh: Where To Do Winter Olympic Sports In And Around London 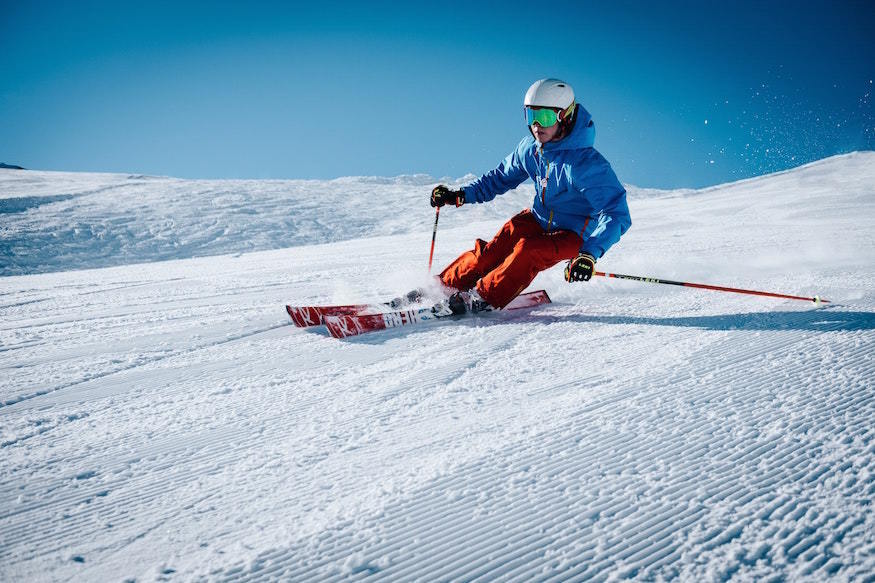 So the Winter Olympics are in full swing, and as well as cheering on your team, you fancy having a go at some of those snowy sports yourself.

London’s somewhat lacking in rolling snow-covered peaks and state-of-the-art bobsleigh tracks, so you’ll have to travel a bit for some, but here’s where you can do winter sports in (and not too far from) the capital . 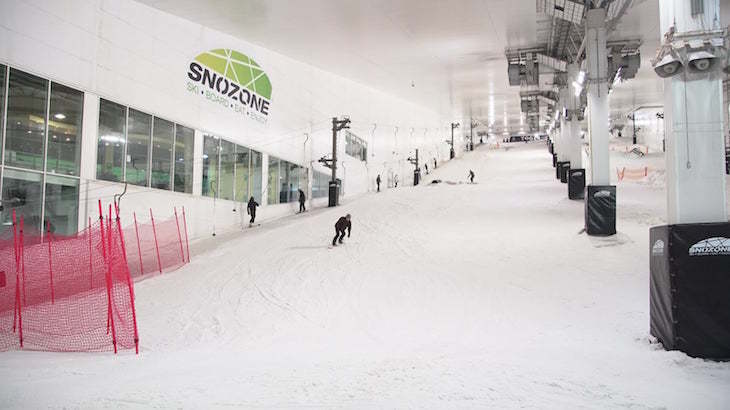 We thought skiing was just a case of strapping on your skies, heading for the top of a mountain and hoping for the best, obstacles be damned. But no: there’s Alpine skiing and cross-country skiing and freestyle skiing and… wait, are we sure they’re not making all this up?

Alpine skiing is supposed to be experienced in the mountains; something that London isn’t exactly abundant with. If you’re sticking in the capital, you’ll have to make do with your nearest hill, and pray for a snow flurry. Otherwise head to a local park for a spot of cross-country skiing (but again, you won’t get far if there’s no snow). 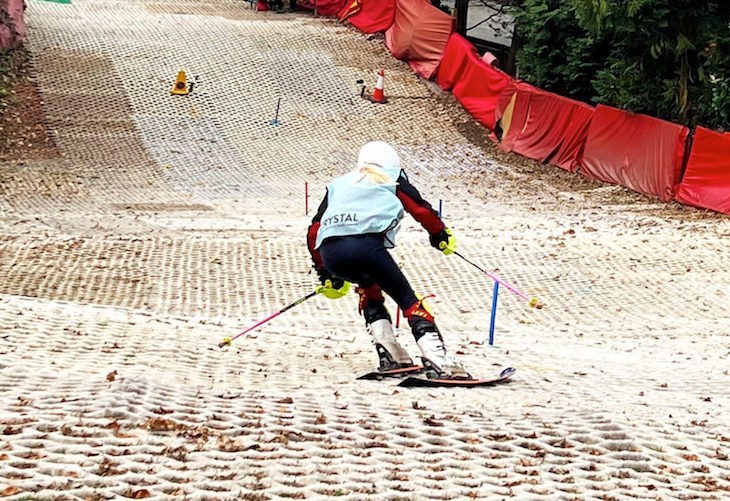 Fortunately, there are various fake ski slopes where you can have a go year-round, regardless of the weather: 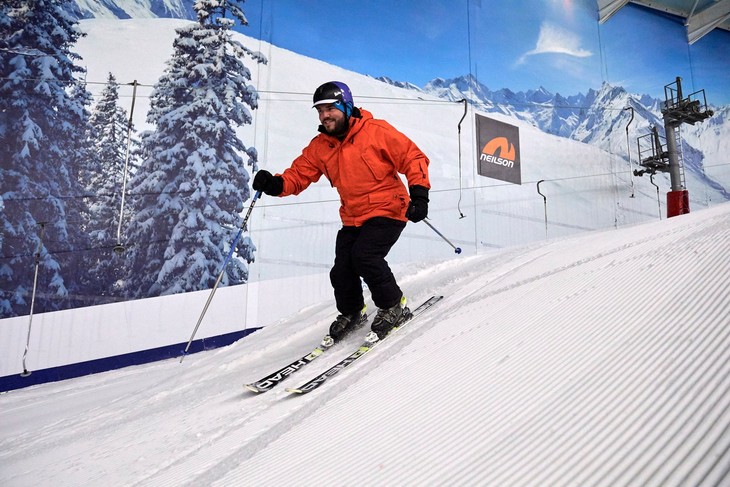 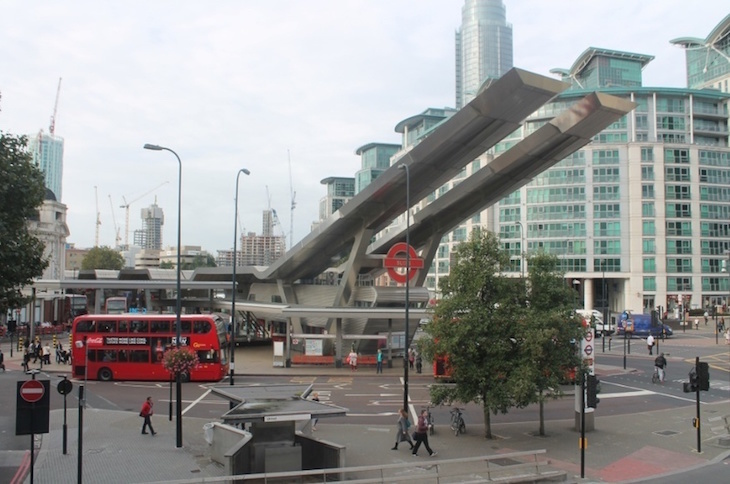 DON’T even think it. Photo: Londonist

The ski jump is perhaps the most iconic event of the Winter games, helped along by both Eddie the Eagle and Channel 4 show The Jump, which ran between 2014 and 2017, and had celebrities risking their limbs by launching into the void. There were many injuries.

There aren’t any ski jumping facilities in or near London — in fact, there aren’t any in the whole of the UK. However, in 1950 a ski jump competition was held on Hampstead Heath. A team of 25 Norwegian skiers brought the snow with them — 45 tons of it, packed in wooden boxes insulated by dry ice.

Of course, there are various landmarks around London that look like they could be used as ski jumps — the soon-to-be-demolished Vauxhall bus station for one, as well as the roof of the main tower on the Golden Lane estate at Barbican — but PLEASE DO NOT TRY THIS. 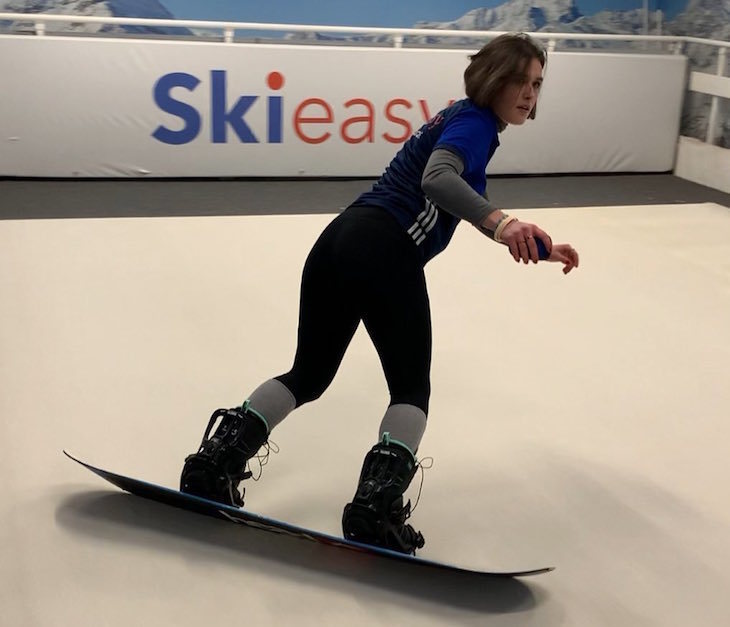 There’s something of an overlap between skiing and snowboarding locations, as they require the same infrastructure. Here’s where you can try snowboarding:

Where to try Bobsleigh and Skeleton 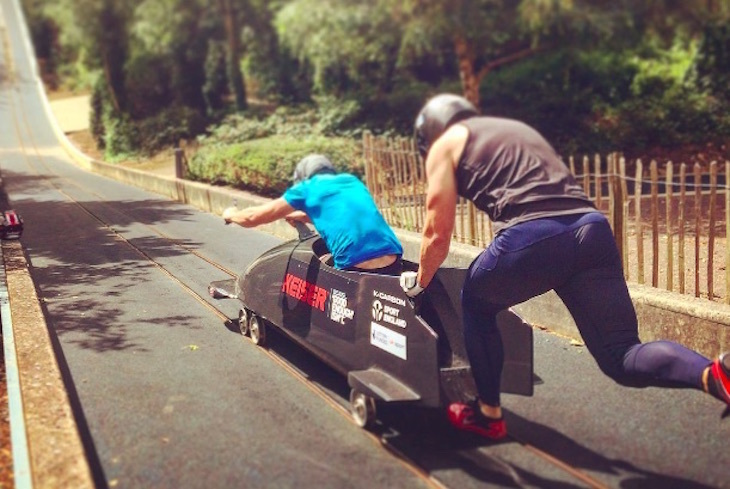 Of all the Winter Olympic events, bobsleigh is the one we’ve always fancied having a go at, even before our first ever viewing of Cool Runnings. Sadly, bobsleigh (or bobsled) tracks are lacking in this part of the world — in fact, the only one in the country is owned by the British Bobsleigh and Skeleton Association, and located in Bath. The good news is that they do run public taster sessions where you can try bobsleigh, skeleton, or both, though bear in mind that there’s no ice involved on this specially designed track.

What’s the difference, you ask? Bobsleigh involves a team of people pushing the sleigh to get its speed up before they all jump on. Skeleton involves a single competitor lying face down on a flat sled, traveling head first. Both involve high speeds — skeleton can reach up to 80mph, and bobsleigh up to 90mph (though the world record is a hair-raising 125mph). If that’s a bit too brisk for you, may we suggest the Fforest Coaster at ZipWorld in Wales? It’s not a winter sport, but it ambles through the woods at a calm 25mph, though you can slow it down even further if you fancy.

Further afield, anywhere that once hosted the Winter Olympics is a good option, as the infrastructure is often left in place long after the athletes and supporters pack up and go home. Try these three, across the USA and Canada if you’re willing to travel.

Luge is similar to skeleton, except it can involve one or two riders, who sit face up instead of lying face down, and travel feet first at up to 90mph. It can be done on both natural ‘naturbahn’ and artificial ‘kunstbahn’ tracks, of which there are neither in London. The British Bobsleigh and Skeleton Association don’t get involved with luge, and we haven’t found anywhere in the UK which offers it. Instead, why not try tobogganing at Chatham Snowsports Center in Kent? It’s open year-round, with the longest track in the UK.

Another alternative is to try a vodka luge — a gimmicky ice sculpture designed to dispense shots into a waiting glass… or mouth. Just don’t go trying any other sports after. 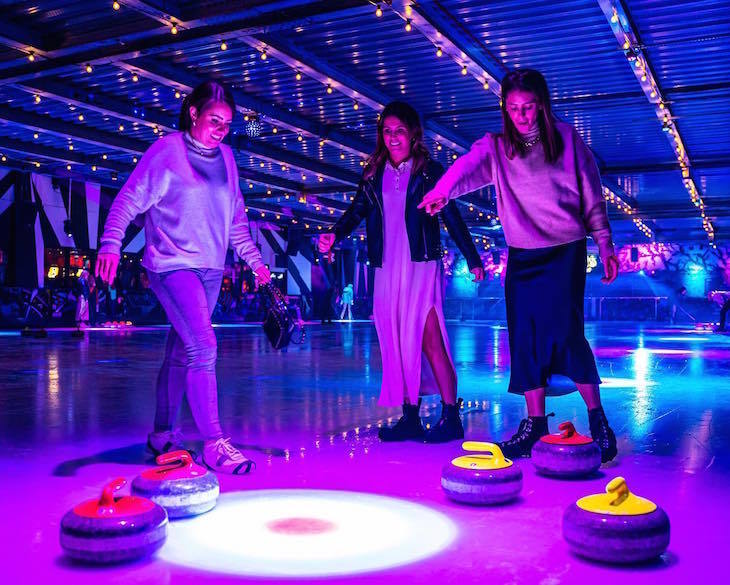 The sport of curling has had something of a renaissance in recent years, with various curling lanes popping up for winter 2021-2022. Some of them have since popped back down, but here’s where you can still polish the ice:

Figure and speed skating in London 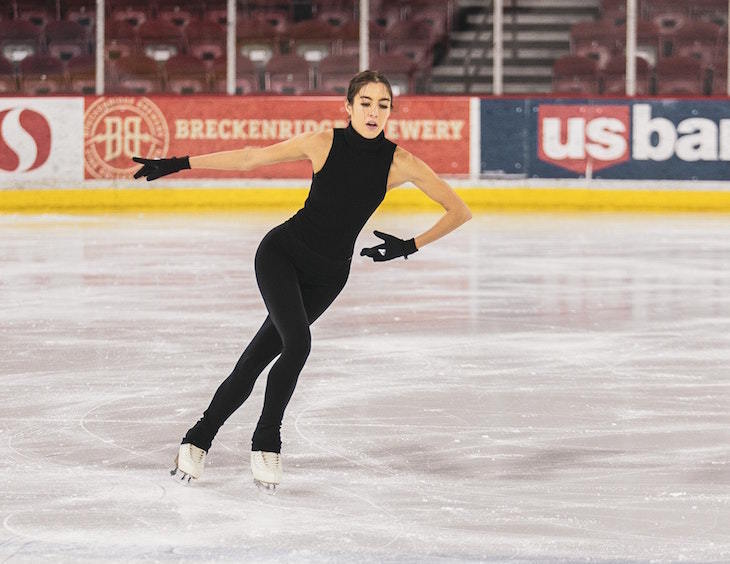 Oh, to look that elegant on ice. Photo: Logan Weaver/Unsplash

Three different Winter Olympic sports involve ice skating: figure skating (think Torvill and Dean — or Dancing On Ice); speed skating; and short track speed skating. The fourth, non-Olympic style, and the one we excel at ourselves, is something we like to refer to as trip-and-tumble skating. We’ve not picked up any medals (yet) but the bruises speak for themselves.

At Christmas, London is replete with temporary ice rinks, though they’re more aimed at your once-a-year skaters than anyone looking to get into it seriously. The rest of the year you’re left with a few options; Alexandra Palace, Queens, Streatham Ice Centre, Sobell Leisure Center in Islington, Sapphire Ice & Leisure in Romford and Lee Valley Ice Centre, which is currently closed for a major overhaul. All of the centers which are currently open offer ice skating lessons for various levels from beginners. You may learn a few tricks and moves as your progress up the levels, but none of them are specialist figure skating classes, so don’t start humming the Bolero just yet. 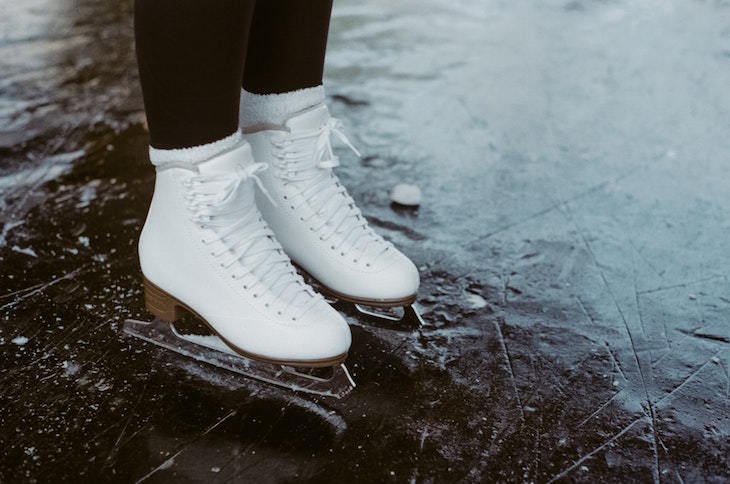 As for ice speed skating, there isn’t a track for that in London, which is disappointing when you consider that Great Britain’s oldest speed skating club was founded here — though it began as roller, rather than ice, skating. These days, the confusingly named Aldywch Speed ​​Skating Club is based in Guildford, and seems to be the closest club to the capital — here’s how you can give it a go. Closer to home, the London Speed ​​Skaters Team indulge in high-speed roller skating. 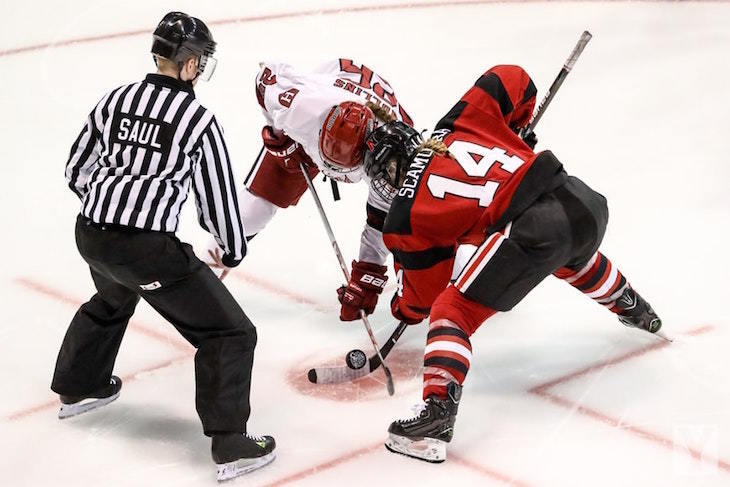 Ice hockey is probably the most commonly played winter sport in London, so much so that we’ve put together a guide to the various teams in the capital and where and how to watch them.

Playing is a different matter. Ice hockey is a fast-paced game, where injuries do happen, so it’s not for beginners or those with an aversion to blood (their own, or others’). Although players with the four main London teams (Streatham, Haringey Huskies, Lee Valley Lions, and Romford Raiders) aren’t professionals, meaning they don’t get paid for playing, they all have experience and the teams don’t take beginners.

So how can you get into ice hockey? The teams mentioned above sometimes hold open sessions at the beginning or end of the season, where the public can have a go. Keep an eye on the teams’ websites and social media for details. Additionally, Lee Valley Lions recommend that anyone who wants to start out in ice hockey get involved with the Eastern Stars, who train at the same venue but at a lower level.

And as for combining shotguns and skiing? Best left to the Olympic experts.

Another dual-discipline winter sport, Nordic combined features cross-country skiing and ski-jumping, with competitors traveling up to 10km on skis. We’ve covered both of these individual sports above, but as ski-jumping is a no-go in the UK, best give up your dreams of a gold medal in this one.

One last thing. The above sports can all be dangerous, so please don’t try them without the correct equipment and safety gear, and, if you’re a beginner, the assistance of someone who knows what they’re doing. London’s hospitals are busy enough at the moment.