Pascor, London: ‘Food that demands you have a good time’ – restaurant review | foods

Some dishes are as distinct as the cook’s fingerprints. At Pascor on London’s Kensington High Street, that dish is a mini loaf of challah, platted and plump, golden-glazed and sesame-sprinkled. It is served warm from the oven, alongside a dish of smoked tahini the color of iron filings, and a scoop of whipped za’atar butter. When you tear into it, you are greeted by an ineffably light, white crumb, puffing sweet, steamy gusts of baked joy at you.

The shape of this loaf may be different, but the Yemeni-style bread is exactly the same as that first served to me at the Palomar on Soho’s Rupert Street in 2014. There, the head chef, a delightful, stocky, beardy Israeli man called Tomer Amedi would bang it out of the still-hot tin in front of you and then shout at you to get stuck in. I always did what Amedi told me to do, including, occasionally, a few shots of arak. The Palomar under Amedi was a louche, noisy party of a restaurant, especially if you were seated at the counter, where dishes – the Jerusalem Mix of chicken livers, hearts and thighs, or the harissa carrots with salted lemon and parsley or the tagines, many and various – weren’t so much served to you as flung enthusiastically in your general direction.

After making his mark at the Palomar, a sibling to the famed Machneyuda in Jerusalem, Amedi returned to Israel. Now he is back here. child of He is described as the executive chef at Pascor, a neighborhood restaurant in the sort of neighborhood where ownership of a mere BMW is a mark of failure. Which is what makes Pascor so striking. It’s reasonably priced, not just for this silk-knickered bit of Kensington High Street, but for both London in general and for this quality of cooking in particular. Many of the smaller plates are priced in single digits and the rest are in the low or mid-teens. The wine list opens at £23 a bottle. After eating there, I asked Amedi by email whether it will stay like this. I have been caught out by artificially low prices on opening menus before. He agreed they may go up a little; everything is becoming more expensive for restaurants, just as it is at home. But the pricing is part of the philosophy. “I want people to be able to come two to three times a month, instead of only for special occasions,” he said. Let’s take his word for it. 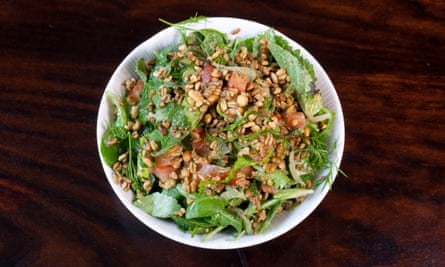 It really does feel like a neighborhood joint. The downstairs space is a narrow, high-ceilinged room with a big open kitchen, built around a grill and charcoal oven. It’s staffed by just two cooks tonight, schooled by Amedi, who is here for a few weeks at a time every couple of months. Just as at the Palomar that kitchen, led by head chef Meirelane Silva Passos, is knocking out Middle Eastern-accented dishes full of vigor and intent. What’s striking is the perfect balance of salt and acidity. A salad is described as a “reverse” tabbouleh, because there’s more foliage – lots of flat-leaf parsley, dill and baby spinach – than grains, in this case, puffed freekeh, made from roasted and polished durum wheat. It comes in an invigorating buttermilk dressing and is the edible equivalent of jumping leads to the mouth. 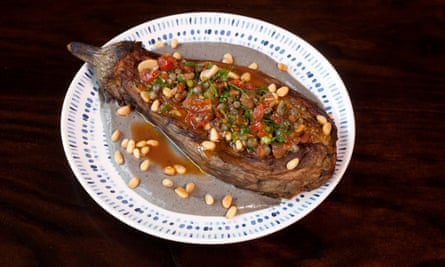 While there are meat options – charred lamb chops for example, or a curious-sounding “Egypt meets Vietnam” duck salad in a pomegranate and ginger dressing with dukka – it’s the garden section of the menu, led off by this salad, which drags me in. We have a whole aubergine, roasted until it is falling apart and smelling deeply of bonfire, or perhaps a trip round the back of the school bike sheds in the good old days. It comes dressed with pickled tomatoes, pine nuts and more of that steel-grey smoked tahini sauce. 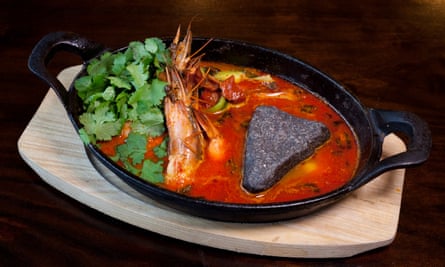 Then there are what they call their “ultra-crispy” potatoes. I’m really not going to argue with what could otherwise look like outrageous hyperbole. New potatoes have been boiled, then squished to become a geological mess of crag and crevice, before being deep fried. You might have taken them out of the fat a bit earlier. This kitchen has left them in, until they have turned the most inviting shade of golden brown. They come dusted in Yemeni spices and gratings of hard cheese and spritzed with salted lime. They lie on an earthy-coloured aioli, flavored with smoked tomatoes. It’s a serious load of beguiling potato action for £8.20. 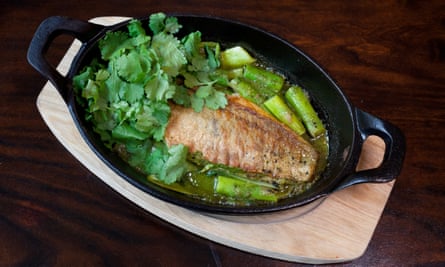 From the seafood section come fat shell-on prawns in a cast-iron skillet filled with a tomato, harissa and salted lime sauce which, like the chef who came up with it, is simply demanding you have a bloody good time. After it’s placed on the table, a fiercely hot stone is added rather theatrically so that the sauce boils and starts to crust against the sides. We eat the prawns and suck the heads and scrape the skillet clean. If that dish is deep and powerful, a fillet of trout, with greens and coriander baked in an almond butter, is lightness and freshness itself.

I am mildly concerned by the description of the salt-cured mackerel in another dish as “local”; the nearest body of water to here is either the Serpentine in Hyde Park or the Thames where it curves round at Putney. I don’t think either of those will have provided. Still, wherever it came from, the cure has given it a dense texture, set off by the roasted beetroot and the sprinkle of fresh red chilli. It’s a salty plateful, soothed by a dollop of labneh. 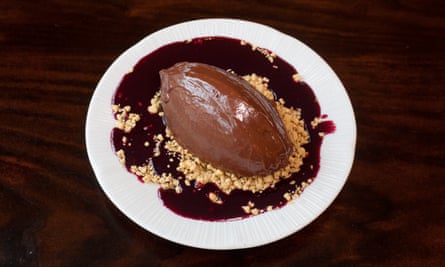 Short and sweet: chocolate and tahini mousse on a biscuit crumb, with a berry sauce Photographer: Sophia Evans/The Observer

The dessert offering is short and designed for ease of service. We have a fat scoop of chocolate and tahini mousse on a biscuit crumb, drizzled with a little berry sauce, and a glazed coconut and almond financier, which looks terribly elegant but has the comfortingly familiar crunch and chew of an old school macaroon. The only misstep, indeed of the whole meal, is the splodge of unsweetened ricotta that’s alongside. It needs more than just a dribble of honey to get it moving. For otherwise, love abounds here, across the bottle of crisp white wine from Portugal and the steaming fresh mint tea, served at the end in delicate porcelain of the sort Granny might have kept for the best. Pascor is the Latin for to feast or devour, or so the internet tells me, because I never studied classics. It certainly describes what we did. Tomer, it’s great to have your food back in London.

It’s all change at Raymond Blanc’s Le Manoir. Gary Jones, who recently stepped down as executive head chef after more than two decades in the role, is to be replaced in January by Luke Selby, currently of Evelyn’s Table in London’s Soho. He will be joined at Le Manoir by his brothers Nathaniel and Theodore, who have been cooking alongside him at Evelyn’s Table since it launched in the cellar of the Blue Posts pub in 2020. Luke started his career as a commis chef at Le Manoir in 2009 , and has also worked at Hide and Restaurant Gordon Ramsay.

Chef Dave Mothersill, who has worked in some of Brighton’s best-known restaurants including the Salt Room, the Gingerman and Terre a Terre, is to open his first solo venture in the city. Furna, on New Road, will have just three dozen seats and will serve a decidedly upmarket tasting menu at £90 a head. Dishes will include mushroom agnolotti with black garlic, chestnuts and Wiltshire truffle, veal sweetbreads with kabocha, maple sherry and a roasted chicken sauce, and mirin meringues with clementines.

Rockfish, the southwest-based seafood restaurant group, will be offering free children’s portions of fish and chips to all under 11s, when an accompanying adult orders a main course, between now and March 2023. “Our aim is simple,” founder and CEO Mitch Tonks has said. “To bring families together this winter to enjoy the amazing local, sustainable seafood on our doorstep. We’re hoping our initiative might inspire others in the industry to take a similar approach.”