A quarter of a century ago, the future looked decidedly brighter for the London Broncos.

Hot off the back of a second-place finish in Super League II, they sunk Canberra Raiders in front of almost 9,000 fans at The Stoop, and two years later reached their first Challenge Cup final at a sun-drenched Wembley, with a side featuring the likes of Shaun Edwards and Martin Offiah.

Backed by Richard Branson’s cash, it seemed the sky was the limit for a club that had struggled to assert itself in various previous guises prior to the sport’s summer revolution that appeared tailor-made to establish a top-flight force in the capital.

This weekend the Broncos traveled to Dewsbury entrenched into the Championship relegation zone, and facing the very real danger of a plunge into League One, with its prospect of games against the likes of Cornwall and their London neighbors, the Skolars, next season.

A hard-earned 18-26 victory – only their second in 15 Championship games this term – deflected the immediate danger for Mike Eccles’ side, enabling them to leapfrog their rivals out of the relegation zone.

Nevertheless, their current predicament hardly tallies with the stated ambition of the club’s long-term owner, David Hughes, who inherited it from Branson in 2002, to attract crowds of 5,000 within three years to their latest shared home at Plow Lane, where they moved at the start of this campaign.

Simultaneously, however, Hughes announced that the Broncos would become part-time and conceded that they faced a “transitional period”, which made their consequent struggles this season all the more understandable.

Tulsen Tollett, who made over 100 appearances for the Broncos between 1996 and 2001 and played alongside Offiah and Edwards in the Wembley final, laments the missed opportunities and blames the club’s seemingly endless struggle to acquire a permanent home.

“I’m not surprised by the position the club are in at the moment,” Tollett told the PA news agency. “Even during the times I was there, we were constantly moving from one place to another and failing to lay any foundations. 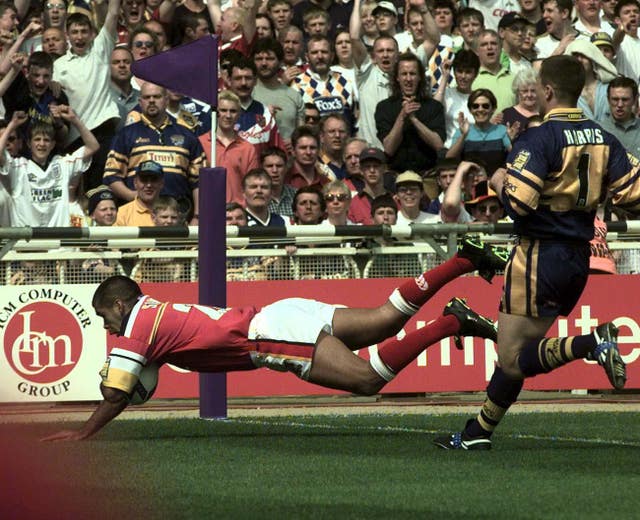 “Those years around ’97 and the cup final, when we had up to 10,000 fans at The Stoop and were backed by Virgin, they were heady times for the club.

“There was a real sense that it was time to build on what was happening, but the following year we returned to Charlton. We can look back now on a chance missed.

“I don’t have a problem with the club going part-time but it has got to be realistic. If you are part-time you have to lower your aspirations.”

Relegation this season would be catastrophic at the time when the sport’s recent link-up with IMG makes it imperative for clubs to position themselves for another potential shake-up.

And for Broncos interim coach Eccles, lingering memories of the club’s golden age can still serve to inspire the club to begin the long haul to regaining those previous heights.

“I try to make the players aware of the club they are representing and what we are about,” Eccles said. “We have fallen short in recent years and let ourselves down, and that’s what really hurts.

“Going part-time was always going to be difficult because it was a fundamental shift in the shape of the club. So we’ve got to start small from now, and start climbing up the Championship ladder. We will learn a lot from the experiences we are going through right now.”