Behind a row of local authority maisonettes in Islington, north London, on a sun-drenched Tuesday morning, the air hums with insects. Landing bees bend the stems of a patch of lavender as Peter Louis, 60, clears overgrowth with shears.

“I come here in winter probably once or twice a week; in summer probably about two or three times a week,” he says. Louis lives alone and is out of work because of poor health. But at the project he can meet friends, and even when he doesn’t the work is a salve to his isolation.

“Since the Covid lockdown I suffer from anxiety, stress and depression, and I’m a hands-on person: I have to do something, sitting at home won’t help me,” he says. “And at the end of the day I feel really good. It’s not because I might have fruit or veg to get out of it; it’s the fact that we’re doing this for everyone.”

Islington is London’s most crowded borough: 236,000 people crammed into 5.74 sq miles. Land is scarce and expensive: Family homes with gardens change hands for £1m-plus, but almost a third of the borough’s households have no private outdoor space. Space is so tight Islington cannot meet its legal requirement to provide residents with allotments. It is hardly the ideal location for growing food.

But for the past 12 years growing food is exactly what the Octopus Community Network has been doing here. The charity runs eight growing sites, located in areas of serious deprivation, and supports a number of other smaller initiatives.

They offer access to nature, education and for socialising. And, when harvest time comes, produce is distributed to the community, providing fresh organic vegetables to families that struggle to afford them.

On the Hollins and McCall Estate in Tufnell Park on Tuesday, at Octopus’s community plant nursery, six women are potting up vegetable shoots. The nursery, with a range of beds, a polytunnel, various composters and a shed full of equipment and supplies, is Octopus’s education and learning hub.

“The beds are demonstrations of different kinds of growing techniques,” says Frannie Smith, the charity’s full-time community cultivator, overseeing the work. “Then the plants get given away to community groups across Islington to help facilitate their growing. Everything here is about making connections with people that want to be involved with urban food growing in Islington.”

Daniel Evans, a researcher at the school of water, energy and the environment at Cranfield University, in Bedfordshire, says growing food in towns and cities can deliver ecosystem benefits, “which are much more than just about putting food on a plate”.

Recently Evans worked with colleagues from the universities of Lancaster and Liverpool in scouring every single piece of research they could find on the benefits of farming areas in urban spaces. Vegetation of the right kinds are particularly good for sequestering carbon from the atmosphere, regulating microclimates, harboring biodiversity, encouraging pollination, and restoring soils, they found. In some circumstances, green spaces can even mitigate natural disasters by, for example, absorbing flood water.

“There are benefits also to humans, in what we call cultural services, things like recreation,” he says. People getting out into the allotment or community garden can often bring them not only physiological but mental health benefits as well. Often it allows them to interact with people who they wouldn’t necessarily live or work near, thereby kind of enhancing those social relations and, for some of them, it’s a great opportunity to get, you know, spiritual experience, a sense of being in a green space, whereas most towns and cities are pretty much grey.”

Smith finds a range of ways to get people involved. Members of the local Good Gym help carry deliveries of compost. Residents of a nearby halfway house for recovering addicts till the soil of a church garden alongside wealthy octogenarians. Soon, Octopus will begin a partnership with Mencap to teach disabled adults, as well as volunteers to work with them. 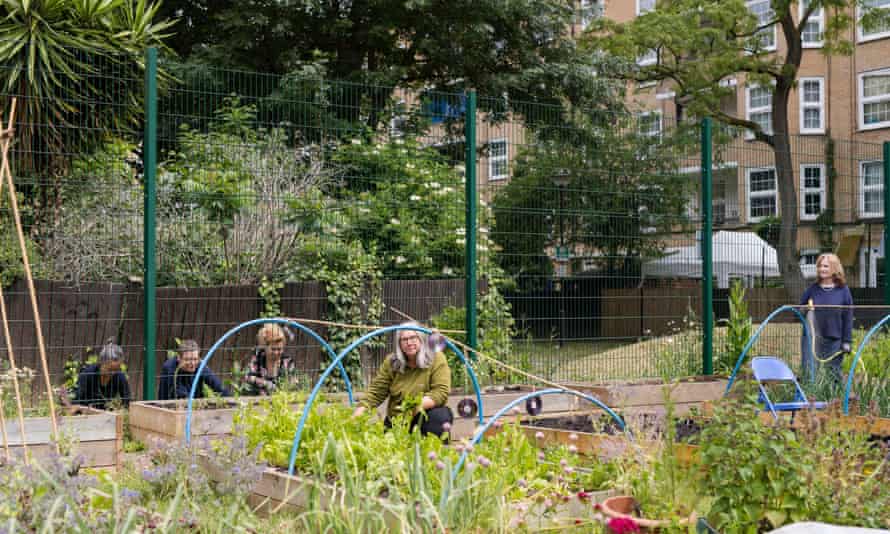 But, as many social and psychological benefits as a scheme such as Octopus brings, the food growing cannot just be an afterthought.

“What we’ve seen in the last few years now is a real need to start thinking about growing local food, or at least sharing out the load,” says Evans. “The UK has a great reliance on food imports. The UK a couple of years ago was importing about 84% to 85% of food; about 46% of vegetables that are consumed in the UK are imported from abroad.

“So, of course, when you have a crisis event, like a pandemic or like Brexit, that can really threaten supply. And so if you get local authorities or people growing in their local community together, just helping out producing fruit and vegetables for that local community, then you’re helping to lessen the severity of those shocks.”

Eight-and-a-half miles south, across the River Thames, and 33 meters under the streets of Clapham, is an underground farm run by Zero Carbon Farms (ZCF) an entirely different kind of urban food-growing project, which says it uses 70% less water and a fraction of the space of a conventional farm.

Evans says the future is probably a mix of the Octopus and ZCF models. “Because there’s quite an interesting paradox here. You get more people into a city, and then you’ve covered up all the soils for those residential buildings and you’ve not got anywhere to grow food any more. So we need to think quite creatively. This is where the hi-tech and digital might come in, about how we use some of these spaces to alleviate that issue.”

But a project such as ZCF lacks key elements offered by Octopus, Evans adds. “The real question really here is how does it affect the individual life – you know, the individual urban dweller?

“I think cases like the Octopus community – which is not hi-tech, it’s pretty accessible to all, it brings together a wide variety of people from the local neighborhood – that is, in a sense, what creates sustainability, because we can’ t always have experts and specialists doing these things on behalf of everyone,” he says.

“We need to get the local community involved so that they in a sense help feed themselves and help sustain their own futures.”

Where London Marathon runners can eat and drink for free