The server’s end-of-dinner offer at Lisboeta had all the hallmarks of the chef. “Nuno would love you to try the pork-fat custard with a port caramel,” he said, in a manner that suggested chef-patron Nuno Mendes, the kind-eyed disrupter of Portuguese food in Britain, had left me no real option.

I didn’t want the pork-fat custard. I wasn’t entirely sure, earlier in the meal, that I wanted the razor clam and blood sausage on toast – it tasted like musky armpit – but in both cases I found myself nodding in acceptance, because Mendes’ restaurants are always a wild one educational ride. He has become famous and loved in the British food scene over the past decade for a shaggy, avuncular charm that masks a fervent mischief in his cooking, plus a noble urge to chivvy Britain past the piri piri and pastel de nata approach to Portugal. If Mendes did crack one day and simply dish up spicy chicken, croquettes and octopus, he would probably be richer than God, yet instead he persists with the likes of cured, room-temperature slivers of amberjack topped with orange and onion, or wild mushrooms in egg-yolk bread sauce alongside plates of pungent sheep’s cheese from Serra da Arrábida. 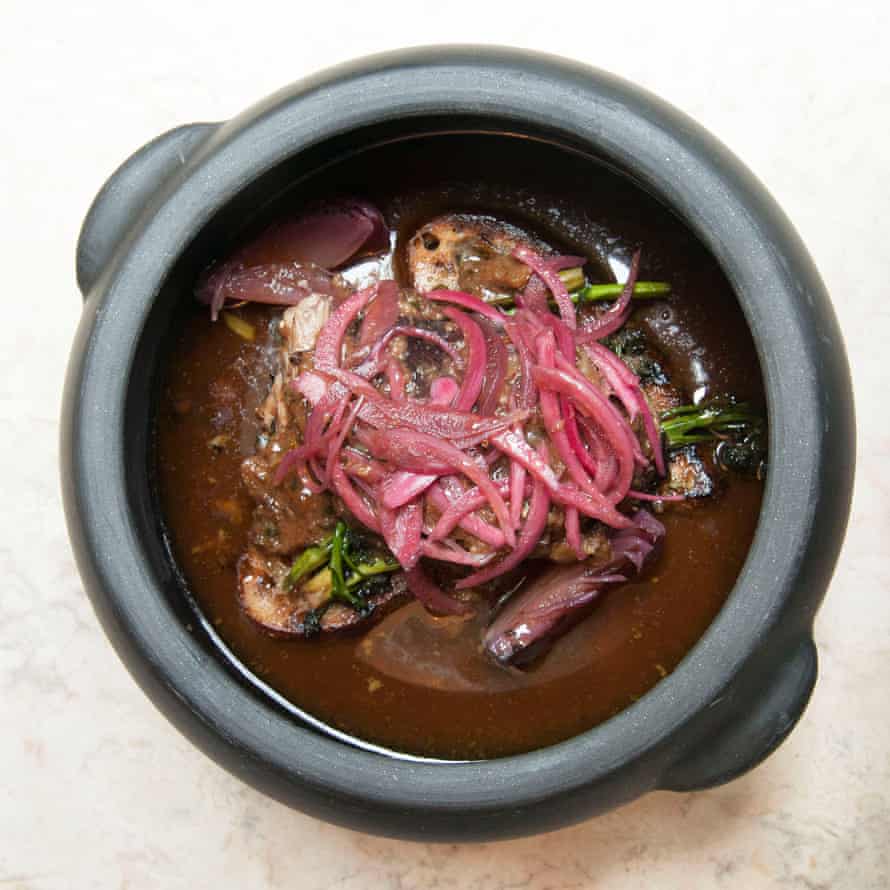 And lest everything, to the British Palate anyway, be a little wobbly and unstructured, there is Coombeshead Farm bread with vivid-pink, whipped pork fat to mop one’s plate. Each dish at Lisboeta comes with a story from each server about their mother or grandmother or great aunt who cooked this very egg-yolk sauce or lamb chanfana stew every Sunday, because Mendes has created a slice of deeply personal Portugal here, and the staff can ‘t help themselves. So as you begin the chanfana – a dark bowl of lamb shoulder slow-cooked in red wine with turnip tops and chunks of bread – they approach to recount tales of their childhood. The emotion is sort of exhausting, but Grace Jones and the Clash were playing loudly in the bathroom, so I hid in there occasionally. 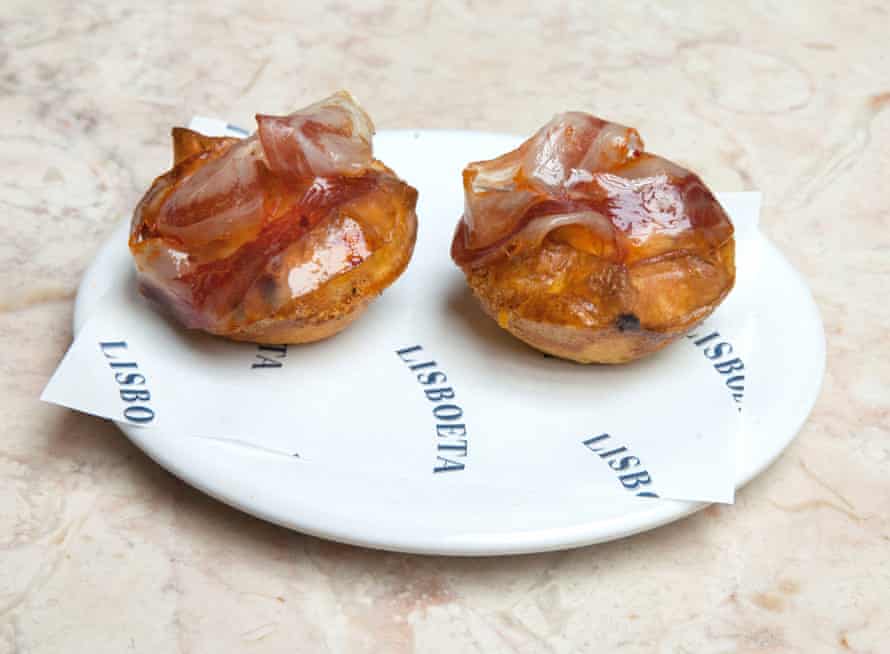 Lisboeta’s Goan-spiced pork pie: ‘Delightful… but as big as a baby’s palm.’

On a Monday night, in mid-spring, Lisboeta was jam-packed, because wherever Mendes goes, the food crowd follows. He was once the chef at Chiltern Firehouse, a sort of celebrity safari park, which I always thought was a peculiar fit, because Mendes really cared about cooking and the clientele cared only about staring at each other’s table and hoping to see Romeo Beckham or Lindsay Lohan. Mendes was bringing the intensity of Ferran Adrià – whom he cites as an influence – and his clientele were pushing salad leaves around the plate while uploading toilet selfies. Before that, Mendes opened Viajante, where diners first saw his real passion for showcasing Portugal, but with Japanese, Iberian and South American influences. Later, at Mãos, he offered an intense, three-hour, seasonal tasting menu to only 16 people at a time. Lisboeta, by comparison, feels like a breezier, more down-to-earth space. It isn’t remotely cheap: that very delicious, deeply satisfying lamb stew is £44, to serve two, although a single hungry person could easily demolish it; a side of charlotte potatoes is another £6. A delightful, crumbly Goan-spiced pork pie is as big as a baby’s palm and comes in at £3 a mouthful.

However, as rents and bills increase in restaurants, I am growing inured to dishes being stretched, styled and described to feel much larger than they are once you remove the leaves and garnish. At Lisboeta, there are hits and misses, but I certainly left more learned on authentic Portuguese dining. Do I like the wobbly, porky, milky, egg yolk custard on a bed of blood-red port caramel? Not especially. It tastes precisely as it sounds: like a bacony Bird’s trifle. But do I support Mendes’ indefatigable urge to serve it? Yes, I do. With all my heart. It’s tough out there for mavericks right now, and we have to applaud them. Even if the bacalhau à brás – confit cod with caramelised onion and potato – tastes the same as one of those 1980s cod portions that we boiled in bags. 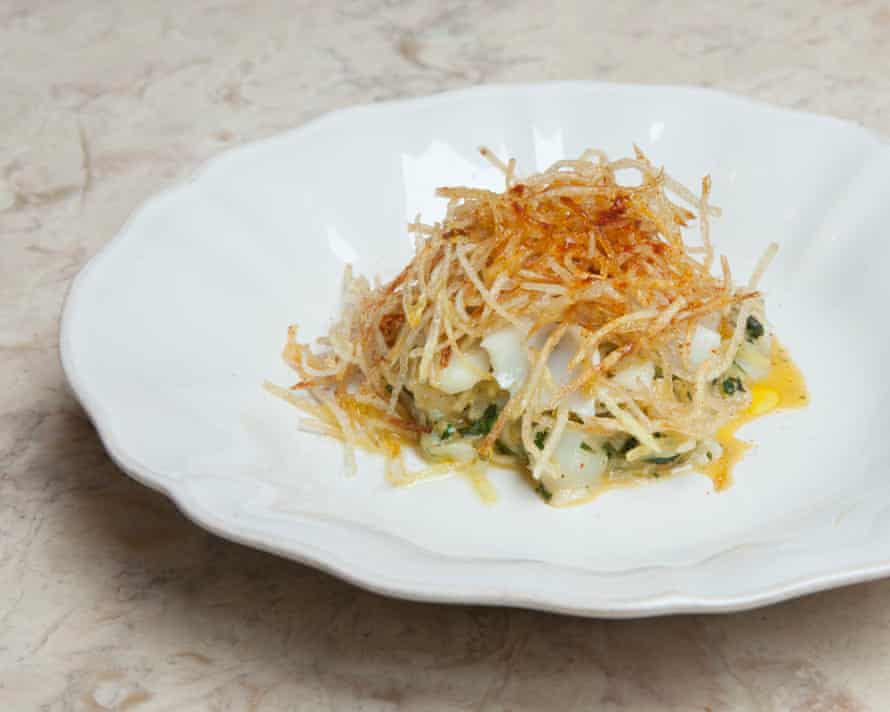 Despite all these things, Lisboeta is an intimate, gently challenging attempt to bring the vibrant traditions of Portugal to UK palates, with Mendes at the helm offering his typical twinkly-eyed tricks. There are much worse places to order a white port and tonic and half a dozen pork pies as you watch the London food scene waltz past. The service is charming and prompt, the music is great and Mendes will most likely be behind the pass, because it’s beyond doubt that, when it comes to his restaurants, he cares deeply. His pork custard will most definitely be cited on end-of-2022 restaurant round-ups. And rightly so. It was unforgettable.

This article was amended on April 16, 2022. A previous version incorrectly said that Nuno Mendes was at Chiltern Firehouse before Viajante.