Actress Anushka Ranjan and her husband, actor Aditya Seal, are in London. And the couple has kept their followers glued to their gastronomic adventures there. One of their recent indulgences included a delicious cheese souffle. Anushka shared a picture of the same on Instagram Stories and gave us some major food goals. She seemed to have a great time at a London-based restaurant where the two gorged on this classic French treat, covered entirely with cheese. She captioned the post, “Cheese souffle all day.” Cheese souffle is a baked French dish that can be sweet or savory. If Anushka’s post has piqued your interest enough to make cheese souffle at home, you can find the recipe here.

In another post, Anushka Ranjan was seen sitting with a glass of what looked like a refreshing lemonade. The drink came with a slice of lime and mint leaf. Anushka had a smile on her face, implying that she was happy with the food experience. 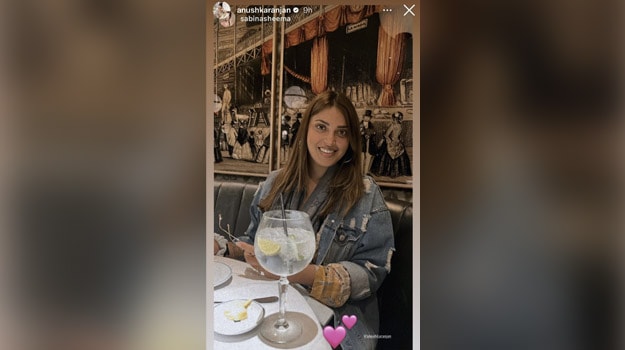 Anushka Ranjan and Aditya Seal are certainly having a blast in London as they are busy treating themselves to mouth-watering delicacies. Recently, the actress had shared snippets of their meal spread that left us drooling. The duo enjoyed a plate of crispy calamari that was garnished with chilli, and lime, and served with a side of mayo. They also had burgers with delicious filling and cheese drizzled on them. That apart, the duo also enjoyed a few cocktails.

Anushka Ranjan and Aditya Seal’s love for food also extends to desi delights. A couple of months ago, they were in Agra and gorged on a number of popular street foods there. Anushka dropped a picture of crispy aloo tikki topped with green chutney and tangy tamarind chutney. She wrote, “Dinner for champions.”

When Anushka Ranjan and Aditya Seal are not traveling, they like to relish home-cooked food. Once, Anushka had made a bowl of gnocchi tossed in pesto sauce, with a lot of cheese on top, for Aditya. On the plate, we could also spot a freshly-baked croissant. She captioned the post, “Homemade Gnocchi for the soul.”

Anushka Ranjan and Aditya Seal are big-time foodies and love to experiment with a variety of cuisines. We can’t wait to see what’s on their plate next.